In the first week of Little House/Wounded Knee, Indian nations are like gas molecules and melon-sized gold nuggets are apparently lying all over California. Sound interesting? Then let’s get started!

A word of introduction…

Before I begin talking about this first chapter of Bury My Heart at Wounded Knee, I first want to talk a little bit about the author, Dee Brown. Here’s what I found with a little research:

So a lot of then-current events tied in with the publication of this book!

As I read the short Introduction, I also appreciated Brown’s perspective on viewing history from a different vantage point:

Americans who have always looked westward when reading about this period should read this book facing eastward.

To me, this encompasses the main goal of my LH,WK reading project: to see the “Age of Settlement” from more perspectives than just the dominant European settlers’ view. I think it’s easy and common, especially for Euro-Americans, to get nostalgic about “the way we were” by watching shows like Little House on the Prairie or The Waltons. “It was a simpler time,” we say. But the problem with this nostalgia is that in this reminiscent dream we’re only thinking about white people! Anyway, that’s why I read multiple perspectives, so…

On to Chapter One: “Their Manners Are Decorous and Praiseworthy”

This first chapter gives a brief overview of the big-picture relationship between Europeans and Indians as a whole. What first struck me is that many tribes had a sense that America was God’s gift, entrusted to them. A quote from Tecumsah of the Shawnees begins the chapter and says, in part, “Will we… give up our homes, our country bequeathed to us by the Great Spirit, the graves of our dead and everything that is dear and sacred to us? I know you will cry with me, ‘Never! Never!'” (emphasis added). In school we learned about the settlers’ sense of “manifest destiny” — which is “the 19th-century doctrine or belief that the expansion of the US throughout the American continents was both justified and inevitable.” But either we didn’t learn or I forgot (also possible) about the equally strong sense of divinely-ordained connection to the land felt by Native tribes, as evidenced in Tecumsah’s words above.

The difference, it seems to me — especially as I read about the larger sweep of Indian/Euro-American relations — is that the Indians’ posture towards the land was less possessive. In fact, several times even in this first chapter Brown mentioned the absurdity of the idea of land ownership to the various Indigenous groups. They viewed their occupation of the land as a more flexible arrangement. When I mentioned this to Daniel, he said, “Yeah, the tribes were like gases. The way they take up space is fluid and through dynamic pressure and movement. More population does mean more land, but not including fixed boundaries (like a solid) or even fixed volume (like a liquid).” (Trust my biochemist to take it sciencey!)

For example, when European settlers first arrived, the initial reaction of most tribes was to shift to give them a little space. The problem was that “a little space” wasn’t enough, because Europeans didn’t behave like gas molecules. Europeans behaved like solids, establishing fixed boundaries as they took up more space and repelling gas molecules (Indians) that would approach. Not only that, but the “solid” Europeans kept advancing — “like a non-melting glacier”, says Daniel. They wanted to keep increasing the territory inside their boundaries, and they had the technology (guns, germs, steel) to come out on top and continue their expansion whenever they clashed with their neighbors.

So the European settlers didn’t respect the boundaries set by their neighbor Indian tribes. And later, when the U.S. Government passed legislation setting a “permanent Indian frontier” at the 95th meridian, white settlers didn’t even respect their OWN boundaries! In 1858, Minnesota became a state — with borders that crossed 100 miles beyond the “permanent Indian frontier”.

As the settlers pushed further and further west, Brown notes: “Because of the vastness of the Northwest country, the Nez Perces believed there would always be enough land for both white men and Indians to use as each saw fit” (p. 12). But they underestimated the vastness of the overflow that continued from Europe (and elsewhere) into the “New World”. By the 1860s, only around 300,000 Indians (1/2 to 2/3 the former number) were left, compared to over 30 million Europeans and Euro-Americans.  Basically, the co-existing gas-molecule Native tribes were steamrollered by the massive solid glacier of Euro-American manifest destiny. 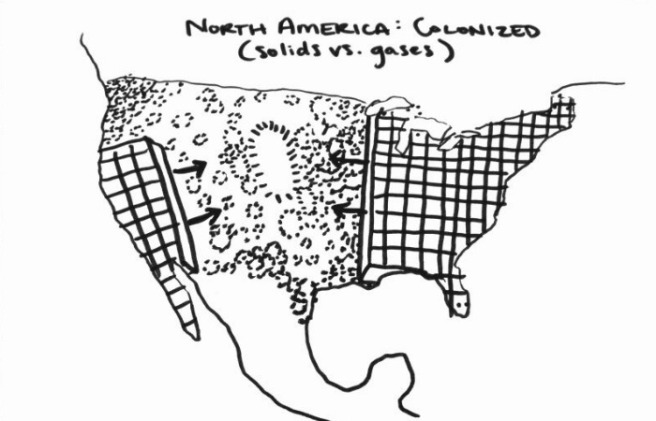 The saddest thing to me is to see the missed opportunity of what might have been if settlers had actually treated the Native Americans they met as equals, rather than as expendable roadblocks between them and “their” land and “their” gold.

The story that struck me the most was that of Squanto — you know, the guy who helped the Pilgrims out. Do you know why he knew some English when the Pilgrims arrived? Because he had been kidnapped and sold into slavery in England by an Englishman. With another Englishman’s help, he escaped and got back home (which is miraculous in and of itself). And you know what he did when more English appeared on his doorstep? He was nice to them and saved them from starvation. SERIOUSLY. The first Indian to be put in a superior position over Euro-settlers: teaches them to farm. The first Euro-settler (Columbus) to be put in a superior position over Indians: enslaves them to death. It’s disgusting! Even the title of this chapter — “their manners are decorous and praiseworthy” — is a quote from a letter Columbus wrote back home, praising how the Indians “love their neighbors as themselves.” HE LITERALLY SAYS THEY ARE FOLLOWING ONE OF JESUS’ MOST IMPORTANT COMMANDS. AND THEN HE ENSLAVES THEM.

I literally cannot comprehend it. Does not compute.

Anyway. To sum up: Indigenous nations = gases floating around areas of the Americas based on food sources and population fluctuation. European settlers = conglomeration of solids that steadily and forcefully pushed native tribes outside “their” new borders with glacier-like implacability.

Now on to the other part of my week one reading…

The Journal of Wong Ming-Chung, A Chinese Miner

This fictional (but history-based) journal takes place first in rural China and then in California at the time of the Gold Rush in 1852. First of all, let me say that I am thrilled that this book was written by Laurence Yep, who is a fantastic children’s and fantasy author and a Chinese-American. That said, it was a little weird to read this account right after starting off with an overview of Indian/Euro-American relations because there are no Indians in this book. Zero. Like not even a side-mention.

This narrative is, first and foremost, an immigrant’s narrative. Wong Ming-Chung, nicknamed “Runt”, follows his carpenter uncle to “The Gold Mountain” to help him “pick up gold nuggets as big as melons”. When he arrives in California, however, he discovers that gold comes in tinier portions and is a bit harder to find than just picking it up off the ground.

I appreciated how Yep portrayed the immigrant’s journey through relationships and changing affinities. When Runt first leaves home, he finds comfort in meeting several other folks who are from his district (like a county); migration stretches his definition of kinship from same-town to same-county. Then when he makes it to California, Runt’s kinship is stretched even farther when he befriends four other boys from different places — Esteban from Chile, Hiram from Euro-something, Brian from Ireland, and Jubal (a slave) from Africa-something. Though they spend relatively little book-time together, Yep uses these “friends of many colors” to explore the differing levels of discrimination for different groups at this time. For example, as white settlers become increasingly violent towards Chinese immigrants, Runt learns that he can’t complain because Chinese are not allowed to testify in court. He then also learns that Esteban and Jubal can’t testify either, because their skin is dark like his. To me, this “friends of many colors” device felt a little simplistic — but this book is written for 9-12 year olds, so it’s actually pretty genius.

The quote that stuck out most to me in this book comes when Runt and Hiram discuss what Hiram will do now that his gold prospecting site has run out. Runt assumes Hiram will go home, where his family and land and ancestors are, but Hiram decides to stay and farm in California because he’s okay leaving all of that behind. This confuses Runt: “Americans are so rootless. I almost feel sorry for them” (p. 145). I totally resonate with this because we moved around when I was growing up, so I sometimes feel a little rootless myself. But I think “rootless” is a legitimate and insightful encapsulation of the “spirit of the American West” at this time. “Serial settlers” got the wanderlust and always wanted to see what was beyond the next hill.

On a deeper level, I think “rootlessness” is the flip side of the “American melting pot”. It can be good to learn new ways — but it can also be sad or even traumatic, especially if done forcibly, to leave behind old or familiar ways, especially when you add relocation to the mix. I’m sure this theme will come up again later.

Overall, it’s a little wonky to read two such disparate perspectives to start. It’s weird to me to think about second-wave immigrants not even realizing that the land had been taken through displacing Native Americans. But, in fairness, this is a short children’s book, so it may have been too much to tell the story of both Chinese immigration AND Indian displacement. …But I’m still going to point out the weird disconnect between initial Indian displacement and later waves of immigration. I’ll be interested to see how this topic is treated in some of my other books.

Tune in next week for: Wounded Knee, Chapter 2 and Incidents in the Life of a Slave Girl.