In Earth: Then and Now, we see “before and after” photos of sites around the world that have experienced massive change, both for better and for worse. Ready? Then let’s get started…

Okay. So. Here’s the world…

So honestly, there wasn’t really that much TO this book. After a short foreword and introduction, the only significant text was a brief section intro page before each collection of photo pairs — so I’ll share a quick thought and then some photos and we’ll call it a day.

I somewhat expected this book to make a pretty strong case for — well, anything. But I was surprised to find it actually coming off pretty neutral. The author stated his thesis right out the gates:

Is there a final lesson here? I think so. Nature is not as fragile as we think. She is resilient. With time, she may recover from the worst we can throw at her. It is we, ultimately, who are the fragile ones. Look at these pictures and fear not so much for nature: fear for us. (p.18)

I actually totally agree with this statement. While I do think that ecosystems and species (including us…) are fragile, I think that Nature / Earth as a larger entity is way bigger and more resilient than any craziness we can cook up. I mean, all this life is still here even after giant meteors and whatever else made alllllll the dinosaurs go extinct. So I think that life on earth will survive… it’s just whether human life on earth will survive, or for which humans, or for how long.

That said, once the author made that point it was pretty much a fairly even spread of good news / bad news photos. Here’s one of the “good news” pairs:

Good news: Seems the Earth is able to heal its ozone layer from the hole we burned in it. Hooray!

Of course, then there’s some bad news as well, like the massive drainage of the Aral Sea that turned most of it into a desert… 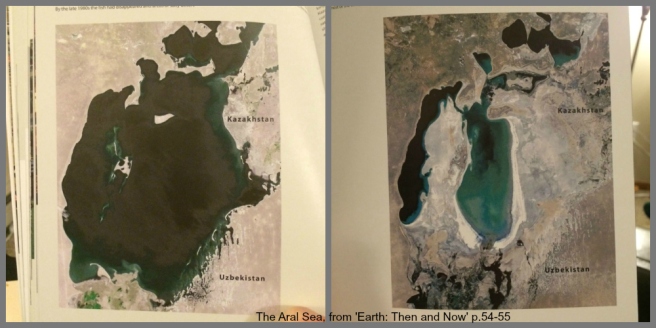 Where folks used to fish for food, now they raise cattle. Think about THAT for a minute.

And, a “bad news” a little closer to home — the much-disputed Tar Sands mining operation in Canada, from a beautiful sunlit forest to a dystopian slurry-field… 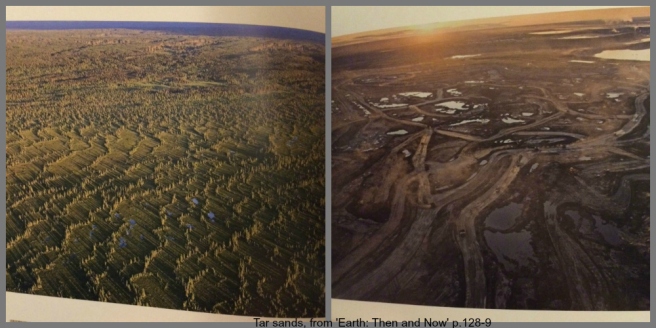 After all these photos, really I just return to the author’s (and my ) original point: yes, humans are capable of causing massive transformation, for better AND for worse. But even if we try our hardest to ruin everything, the Earth will live on. That sentiment is, I think, quite aptly captured by this photo pair: 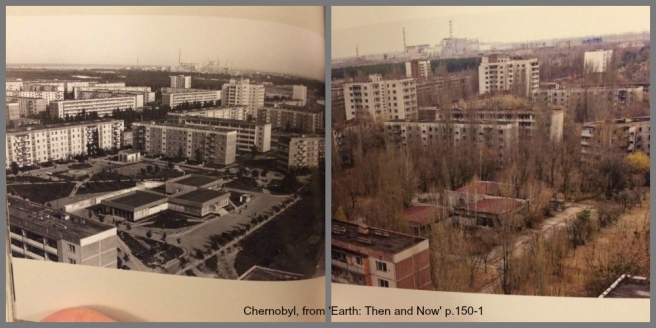 Yep, that’s Chernobyl, still too radioactive to be safe for humans but being slowly reclaimed by the forest. (Nausicaa, anyone??)

Bottom line: We are simply one in an array of God’s wondrous creations. Whether we’re living, breathing participants or returned to dust, God’s good plan will continue.

And with that, I’m now off to start reading my next and final book in this reading project — Plastic-Free: How I Kicked the Plastic Habit and How You Can Too. I’m excited for some really practical stuff to conclude this journey!

[P.S. Thanks to “The End of the World” video for my header titles. What weird, bizarre little throwback to high school! (“But I am le tired…” “Well, go take a nap. THEN FIRE ZE MISSILES!”)]