Sometimes it’s cool to look back and see the path of how we’ve grown.

As I approach a lot of big transitions (among them the graduation of every student I’ve ever taught, the completion of several large work projects, and a job change), I found myself appreciating how my artwork captures my emotional growth over time.

Today was a stressful day.

Between balancing two separate work clients, recently deciding to quit both of them to pursue more standard employment, trying to prepare for the transition and wrap up a couple major projects, begin my job hunt, AND, ya know, do the rest of life, all of a sudden it sort of came to a head today as I began to feel the feelings of overwhelm creeping into my body.

So I did what I know is good for my soul — I got out the ink and made some art.

Any of you who have seen my art or follow my art blog know that my artwork is very emotional and impressionistic. And, knowing the state of my life right now, it doesn’t take a rocket scientist to see where this particular image came from.

But it also tickled my memory, because I created a somewhat similar piece of art a few years ago.

Four years ago, in the spring of 2012, I was struggling. I was 7 months into a teaching job that was *supposed* to be exactly what I had wanted in a teaching job — middle schoolers, racial and economic diversity, subject-based teams, even a decent starting salary. And I was sinking.

I hadn’t quite figured out why, but I knew that something was wrong, and I could feel myself drowning as I tried to keep my head above water in the classroom. But the overwhelm kept creeping in.

One day, in sheer desperation, my non-verbal brain took over and somehow remembered where I had buried an old sketchpad and a set of oil pastels, and I drew this:

I literally hadn’t done any artwork since high school, really, but somehow my body just made this happen, in the middle of my crazy, crazy stress.

It’s interesting now to look back and compare the two pieces of art, the two snapshots of myself. There are some elements that are basically the same — the nondescript person, the blue spheres, the chaotic shapes outside — but even just looking at the art you can tell some things are different. In fact, the pictures can tell you nearly as much as I could by remembering. 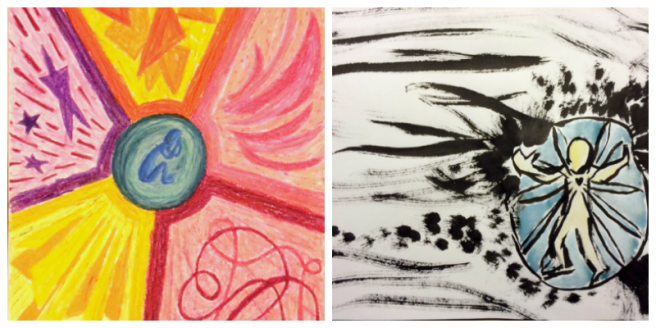 The person on the left is tiny, infantile, literally in the fetal position, as if seeking protection. She seems to be cocooned in a bubble, but the bubble is tiny and almost recedes into a pinpoint compared to the large, aggressive, jagged shapes that seem to fill the landscape. Inside the bubble is calm blue, but everywhere around are vibrant, loud colors and shapes that threaten to pop the bubble and cause the person to curl up tighter.

The person on the right is standing strong, holding a line. Some sort of energy emanates from her center, seeming to protect her, or at least help to hold the boundary. Outside the circle of calm, chaotic shapes and shadows swirl, but the warmth and the focus of this painting is on the person, standing firm, arms outstretched, exuding calm blue and hopeful yellow light. Although it seems that the bubble’s edge is broken in places, the person seems to still be in it, and a burst of dark and light around her right hand seems to indicate active resistance.

See? That’s just me psychoanalyzing my own artwork. (Lol.)

But since it’s my life, I can tell you the actual story.

Four years ago, I got broken by teaching. Totally wrecked. I felt like I had failed. Not only was I miserable at that job, but I had to live with the fact that I had studied for over four years and dragged my new husband to a faraway state — for nothing. I don’t know if I was actually diagnosably depressed, but it was a pretty low time in my life. I didn’t have a lot of emotional resources. I felt pretty helpless and hopeless, and you can see that in my drawing.

Today, I’ve got a few old scars but those are proof that I’ve come out the other side. Now that I know what it’s like to be stuck in a job that’s a terrible fit, I’m not miserable and I don’t feel stuck, because even the jobs I’m leaving are a much better match for my personality and skill set. Moreover, I know I have a sense of agency to change things if they aren’t good for me. And the transition I’m about to embark on will help me to grow even more, both professionally and personally, as I move on to the next thing I want to learn. Yes, I’m feeling stressed today, but I’m aware of my stress, I know why I’m stressed, and I can deal with it standing up instead of crumpling into a ball. (Most days!) Sometimes it breaks through and gets to me, but with a lot of hard work I now have deeper emotional resources to be able to fight back and keep moving through the overwhelm. (And sometimes, I know when I need to take a break!)

Anyway, I don’t really have like a moral to this story — I just am thankful for what I’ve learned and for such a vivid opportunity to reflect on one piece of growth in my life. And I thought I’d share with you all, because sometimes it feels like the internet sort of skims over the tough stuff in life. But the thing is, sometimes the tough stuff is the stuff you’re most proud of.

Fight on, fellow warriors. Fight on.