At the end of my last reading project, I said that I had an idea for another project and would be telling you about it soon. Well, that was almost exactly one year ago… and I’m finally ready to embark on my next project. But first — a little context.

When I first began doing this reading-blogging-project thing, it was kind of a fluke. I accidentally stacked two books together, realized they happened concurrently, and decided to take it as an opportunity to continue my education on the true history of the Native peoples of this land and how this country came to be. I learned a lot about the stories we tell ourselves as a nation and why it’s important that we admit and honor the truth, even if it’s painful.

Then, I got curious about the land itself — while European invaders and settlers killed and stole their way to pushing the Native peoples out of their homes, what was happening in the eco-realm? The answer I found was that imperialism and destruction happened on both a human level and an environmental level, as settlers tried to literally recreate Europe in both culture and ecology.

These two reading projects answered questions I had about the historical, cultural, and ecological context in which I find myself today, as a Euro-American resident where the Plains and the forests meet. What I learned helped me to know my location — in time, in space, in culture.

But all of these questions and answers just led me to another question.

How did I get here?

Now that I know roughly my sociopolitical and geographical location — now that I’ve surveyed the landscape — what I most want to know is, how did I get here?

I’m just like the plants I read about in Changes in the Land — a European flower, growing here in space cleared by violence and colonization, but also brought here on a specific journey. How did I, Rebekah Schulz-Jackson, a German/Slovak Lutheran-raised woman, get all the way over here to Dakota/Ojibwe country at the start of the 21st century? Where do I come from? Who are my people? What have they weathered, what have they lost or gained, and what do they pass down to me — both good and bad?

Over the past year, I’ve begun to dive into family history research, based mostly on the incredibly in-depth work of several other genealogically-inclined relatives in several of my family tree branches. As such, I’ve identified five places that (I think) are where my great-grandparents (or their parents) lived before they immigrated to the US. 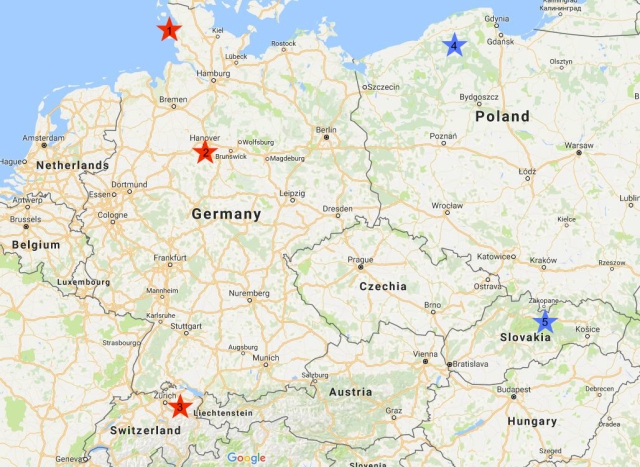 Since these places are scattered across mostly Western Europe — though focused in Germany — I’ll be reading a mix of books focused on both Germany and Europe at large throughout the centuries. Here’s my schedule:

Since I now have a full-time job (which I didn’t when I did my last two reading projects), I’ve spread the reading out to one group per month, rather than per week. Hopefully I’ll be able to stay on track.

As a fun bonus… if I stay on schedule, I will finish this reading project right before my family and I go on a family history trip to Germany/Europe to visit the cities I’ve marked on the map above!!! I’ve been researching and preparing for this project for over a year now, so I’m SUPER excited to get going and prep for our trip, which I’m sure will be very emotional for me, especially since two of my grandparents (my mom’s parents) just passed away last summer. Family history has become a lot more personal for me now.

A Disclaimer, and a Hope

Before I really get into this project, I want to be clear: I’m not really a German person. Or a Slovak person. Or a European person. I don’t speak German, I have a single “ethnic” recipe from my Slovak grandma, and even the most recent of immigrants in my family died before I was even born. Digging back into the roots of my ethnos (people group) will not suddenly make me understand the land, or turn me into an indigenous person, or bring my grandparents back, or answer all the questions I have about who I am and where I come from. As a friend reminded me when I was wrestling with some of these questions, “Germany” is a set of lines on a map, not an actual place, and reading about it won’t restore the stories of my particular ancestors. Europe is a big place, political boundaries change, and for all I know I could be genetically part Italian or Asian or Russian. There is a strong temptation for me (and, I think, for many white folks) to use rediscovering my heritage as an escape. But I can’t turn back time and flee my complicity in American whiteness and become “German” again. (And, especially because what I’d be fleeing to is Germanness, I’m particularly aware that all identities come with their own complicities and responsibilities.)

The purpose of my reading quest is NOT to nail down all the answers, or to return to some idyllic vision of “the way it was.” I know even before I begin to read that my family’s past in Europe was not idyllic, and what has been lost to the sands of the time is comprised as much of pain as of joy.

My goal is simply what it has been the last two reading projects: to emotionally engage with and attempt to understand and walk alongside the stories of a place. In this case, the place where the known stories of my family begin.

I’ve learned from both the Bible (which is full of powerful and complex stories) and the example of Native leaders in my life the immense, immeasurable power of storytelling. So now, I will read stories of Europe and of the place sometimes called Germany — because stories, like rivers, lay down layers of sediment on a place. I hope that digging my toes into each fertile layer will help me understand more about where my family once was rooted, why they chose to leave, and how I can grow my own roots here in another land.

A Note about Whiteness: I want to be super clear about the context and goals of this reading project, because I recognize (and was recently reminded) that white folks investigating their heritage can sometimes go to a really dark, violent place. So this is me being very clear:

I am looking into German/Germanic/European history and culture as a function of my own familial cultural roots, and am attempting to do so in an anti-racist, anti-imperial way. I denounce and repent of the ideology of white supremacy and all its works and all its ways.

Moving forward, I will be posting a shortened version of this note/disclaimer on each post in this project. If something I write seems to be teetering on the borderline, PLEASE leave a comment or message me in some way. I want to be accountable to do this in a way that deconstructs whiteness, not reinforces it.

For more context on how I’m hoping to approach this, check out this super excellent article on differentiating between whiteness and individual European cultures.

P.S. Here are links to the books I’ll be reading, in case you want to follow along.